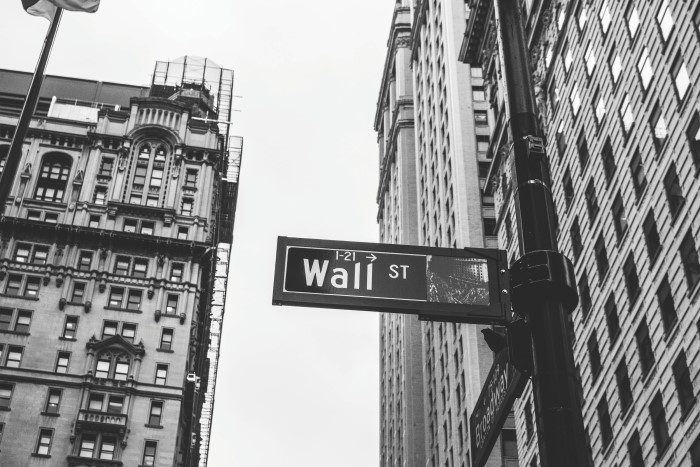 “The history of the New York Stock Exchange begins with the signing of the Buttonwood Agreement by twenty-four New York City stockbrokers and merchants on May 17, 1792, outside at 68 Wall Street under a Buttonwood tree.  In the beginning there were five securities traded in New York City with the first listed company on the NYSE being the Bank of New York. [1]  “Wall Street is the name of a street in lower Manhattan running east from Broadway downhill to the East River.  As for why the street is called Wall Street, in the 17th century the wall formed the northern boundary of the New Amsterdam settlement erected for defensive purposes.  Now the term encompasses all business directly related to stock exchanges and the financial market.”

“There are two terms that are often used to describe market trends, Bull Market and Bear Market.  A Bull Market is one in which investors are optimistic and are trading securities heavily.  There is even a bronze sculpture of a charging bull that has become a popular tourist attraction.  A Bear Market is one in which investors are not as confident and securities trading is down.”[2]  The New York Stock Exchange is “the world’s largest stock exchange by market capitalization of its listed companies at US$21.3 trillion as of June 2017.”[3]  Over the years Wall Street has been the target for angry consumers and political activists.  “On September 16, 1920, a bomb exploded on Wall Street outside the NYSE building, killing 33 people and injuring more than 400.  The perpetrators were never found.”[4]  As we all know the September 11 attacks on the World Trade Center led President George W. Bush to declare what he called the Global War on Terrorism. More recently

on September 17, 2011 Occupy Wall Street movement started.  According to their own promotional information, “Occupy Wall Street is a leaderless resistance movement with people of many colors, genders and political persuasions.  The one thing we all have in common is that We Are The 99% that will no longer tolerate the greed and corruption of the 1%.”[5]

In the midst of Wall Street’s reputation for financial prosperity and the ever present lure of greed, are christian men and women, called by God to work as His stewards.  My question is, do these Christians who work on Wall Street know that they are called by God to their work.  According to Paul Stevens in Is Business a Calling, “the literature of business as a calling is sparse”.  Like so many Christians I was raised with the notion that only pastors and missionaries were called by God and I am working to raise the awareness among those I have relationship with that God has a calling for all of His sons and daughters.  I have been connected with christian brokers, bankers and accountants who work on Wall Street for the last eighteen months.  We have formed a alliance with the goal of bringing transformation to Wall Street. Every Thursday evening and Saturday morning we meet on a conference call to pray for each other and for reformation on Wall Street.  These men and women know that they are called to Wall Street and they pray and discipline their lives recognizing that some day they will have to give an account to God for their stewardship based on, II Corinthians 5:9-10, “Therefore we make it our aim, whether present or absent, to be well pleasing to Him.  For we must all appear before the judgement seat of Christ, that each one may receive the things done in the body, according to what he has done, whether good or bad.”  My intention is to spend next fall in New York.  I plan on doing extensive interviews with Christians who work at the New York Stock Exchange.  My goal is to find out what their current understanding is concerning God’s calling to work and second to motivate them to develop a personal plan to discipline their lives in a way that will be pleasing to the Lord.  I also want to help them in their battle against Satan and his demons so they can resist him according to James 4:7 “Submit to God. Resist the devil and he will flee for you.”

As a personal discipline, several years ago I was instructed by the Lord to fast one meal a day, every day, for the rest of my life.  The Lord said to me that when I end up on Wall Street, “I will fail either financially, sexually or in handling power if I don’t fast one meal a day.”  I have learned over the years that fasting is a personal strategy and strengthens my resolve against the temptations of the flesh, the world and the devil.  I recently met Steve Aritiburn author of Every Man’s Battle.  Steve made a comment that stirred my heart for the men on Wall Street.  He said “most men are under protected when it comes to fighting the devil in their lives”.  He went on to say that most men do not have a plan to protect themselves and eventually fail. My goal is to connect with Christians who work on Wall Street, and in particular at the NYSE.